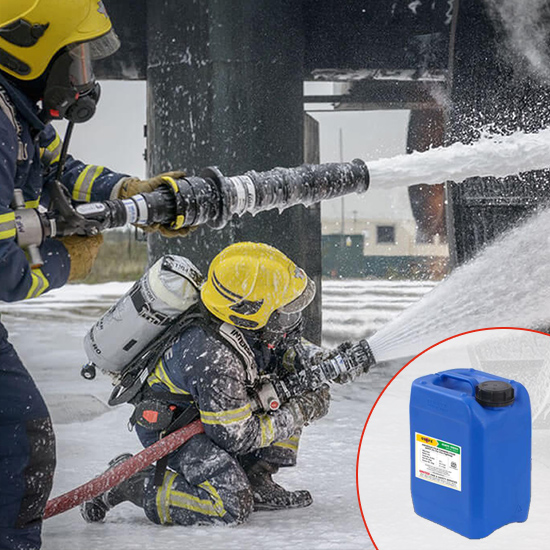 AFFF can be used at Low, Medium and High Expansion, also used in gentle and forceful applications. USAFE fire suppression agents can be used with a wide range of firefighting equipment. USAFE high performance synthetic foams are made as per the national and international standards like Bureau of Indian Standards (ISI), EN1568, UL, NFPA,  IMO…Foam concentrates are also available in AR-AFFF  for water-miscible fuels in fire.

USAFE high performances AFFF are produced using modern C6 fluoro-surfactants, which are considered safer and have less impact on the environment due to their short-chain. USAFE firefighting foams do not contain PFOS (Perfluorooctyl Sulfonate, also named C8) and PFOA (Perfluorooctanoic Acid). The use of PFOS & PFOA is now restricted due to their impact on the environment and health.

USAFE GREEN AFFF is specially formulated non-toxic, clear liquid with no stratication or turbidity, is a fluoro-chemical foam concentrate, commonly known as AQUEOUS FILM FORMING FOAM CONCENTRATE (AFFF), which represents a major advancement in foam technology for effective extinguishment of Class A and B fires, as Low and Medium expansion foam.

It is a unique combination of fluorochemical and hydrocarbon surfactant with C6 technology along with solvent, stabilizers and preservatives to have a superior fire knockdown performance on all types of hydrocarbon fires. The aqueous film formed spreads rapidly over the fuel surface giving a very rapid control and extinguishment. The inherent self sealing property re-seals any disturbed surface of burning liquid, a great advantage in rapid rescue. USAFE GREEN AFFF do not
have any PFOS or PFOA or its derivatives.

USAFE GREEN AFFF is intended for use on Class B hydrocarbon fuels such as gasoline, kerosene, diesel etc. at a proportioning rate of 3% with fresh water and salt water. It is not recommended for use on fuels having considerable water solubility like alcohols, ketones etc. It is suitable for use in special appliances like Crash Tenders/ RIV where rapid extinguishment with limited quantity of foam is required. It can also be used in hydrocarbon storage tanks, process areas, warehouses, tanker loading areas and other local risks involving a spilled fuel re.

USAFE GREEN AFFF is compatible with soft, hard, brackish or salt water. It can be used in combination with Dry powder extinguishing agents either separately or as twin agent systems.

USAFE GREEN AFFF shall not be mixed with other manufacturer’s foam concentrate except for use in emergency situations.

USAFE GREEN AFFF may be stored in its shipping container without change in its original physical or chemical characteristics. Shelf life is expected to be 10 years or more when stored at recommended temperatures and in original containers. It does not show signicant sedimentation or precipitation in storage or after temperature cycling. Freezing and thawing have no effect on performance and the concentrate proportions satisfactorily in ordinary equipment at temperatures above 1.7ºC. Synthetic foam concentrates should only be stored in stainless steel (Type 304L or 316), reinforced breglass polyester with a vinyl ester resin internal layer coating or plastic containers.