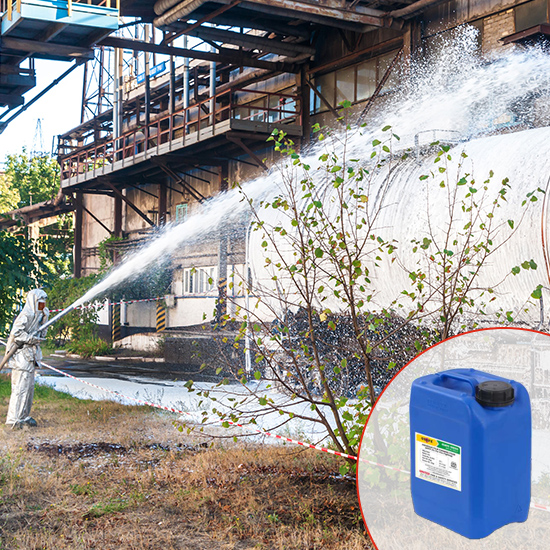 AR-AFFF foams are suitable for quick extinguishment of large-scale class B fires. AR-AFFF agents contain a polymer that forms a protective film between the burning surface and the foam blanket, blocking the oxygen which supplies the fuel in fire. By forming a polymer layer, it seals the fuel surface and prevents the release of fuel vapors. AR-AFFF film prevents foam breakdown by alcohols in the burning liquids. The water contained in the foam solution provides a cooling effect for faster fire suppression. USAFE GREEN AR-AFFF foams had a good burn back resistance.

USAFE GREEN high performance synthetic AR-AFFF foams can be applied in direct or indirect application with a wide range of firefighting equipment. They can be used in high, medium and low expansion on the burning spill.  USAFE GREEN AR-AFFF foams are tested and approved by international standards appropriate to your industry, application and risk (EN1568, UL, NFPA, LASTFIRE, IMO…).

Considering the growing concerns about fluoro-surfactants, USAFE GREEN uses C6 surfactants (short-chain) recognized as safer, and minimizing the impact on health and environment, than PFOS and PFOA. The use of PFOS and PFOA is restricted all over the world due to their persistence in the environment, bio-accumulative characteristics and containing toxic substances.

USAFE GREEN AR-AFFF is intended for use on Class B hydrocarbon fuels such as gasoline, kerosene, diesel etc. at a proportioning rate on polar fuels such as alcohols, aldehydes, ketones, ethers, esters etc. at a with fresh water and salt water. It is applicable with low and medium expansion discharge devices for covering and extinguishing fires of Class A and Class B. USAFE GREEN AR-AFFF is suitable for use in special appliances like storage tanks, process areas, warehouses, loading areas, docs and other local risks involving a spilled fuel fire. It is a multipurpose foam and therefore it gives maximum protection against hazards in the fuel storage area Irrespective of the type of the fuel.

USAFE GREEN AR-AFFF is compatible with soft, hard, brackish or salt water. It can be used in Combination with Dry powder extinguishing agents either separately or as twin agent systems.

USAFE GREEN AR-AFFF shall not be mixed with other manufacturers foam concentrate except for use in emergency situations.

USAFE GREEN AR-AFFF may be stored in its shipping container without change in its original physical or chemical characteristics. Shelf life is expected to be 10 years or more when stored at recommended temperatures and in original containers. It does not show signicant sedimentation or precipitation in storage or after temperature cycling. Freezing and thawing have no effect on performance and the concentrate proportions satisfactorily in ordinary equipment at  emperatures above 1.7ºC. Synthetic foam concentrates should only be stored in stainless steel (Type 304L or 316), reinforced breglass polyester with a vinyl ester resin internal layer coating or plastic containers.